Philadelphia: We are only 2 weeks away from conference tournament action and the Temple Owls keep their push for a first-round bye in the American Atheltic Conference as they took on Tulane Green Wave from Liacouras Center on the campus of Temple University on Sunday afternoon.  Temple comes into the game with (20-8, 10-5 in AAC) and off a loss to Memphis on February 26 while Tulane enters battle with the Owls at (4-23, 0-15 in AAC) and off a loss to Tulsa on February 28.

The owls would get the game started with a basket from Shizz Alston Jr for the 2-0 lead, Tulane would get on the board with a basket from Caleb Daniels to tie the game at 2. The Green Wave would have a 10-6 lead with 17:02. The owls would catch the Green Wave and just take over and Tulane would not have an answer for Quinton Rose & Shizz Alston Jr.

A new Temple record for @InternatlShizz. 40 straight games and more to come… pic.twitter.com/tNdfhrtnlL

#Temple with Buzzer Beater to end 1st half by Shizz Alston, now has 16 in the half as @TUMBBHoops leads 43-30#TULNvsTEM pic.twitter.com/yjESWbjwL1

The Owls would take a 43-30 lead into halftime, Tulane did not know what hit them

In the Second half, it would be a repeat of the first half as the Temple Owls would make things very difficult for the Green Wave to even have a chance to get back into the game. Shizz Alston would not be done with milestone as he would hit another one

.@InternatlShizz with 400 career assists! He's only the 8th person in program history to do it! pic.twitter.com/kYrTYNEizt

Quinton Rose would keep doing damage to Tulane as the Owls would fly to an 80-69 win. Rose would score a career-high 29 points in the win. 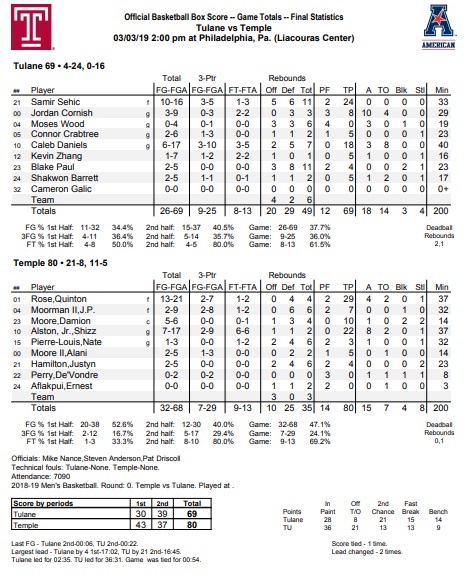 Quinton Rose scored a game-high 29 points and Shizz Alston Jr. had 22 as @TUMBBHoops defeated Tulane 80-69 at home on Sunday in #AmericanHoops action. pic.twitter.com/bZqh37t2St