Philadelphia: One of the marquee events in the NHL came to Lincoln Financial Field in South Philadelphia on Saturday night for the 2019 Coors Light Stadium Series as the Philadelphia Flyers took on the Pittsburgh Penguins. The Flyers would take down the Penguins 4-3 in Overtime. Here are some of my takeaways from the win.

Giroux OT Winner:
The Flyers would win the game in OT as Claude Giroux would blast a shot that went past Penguins goalie Matt Murry and slide its way to the back of the net for the Flyers first win in an outdoor game. This game was Claude Giroux 800th NHL game.

Voracek Ties game late:
With the flyers down 3-2 and under 20 seconds to go, Flyers won the draw and Jake Voracek took a shot from the side of the net and tied the game and crowd at Lincoln Financial field would go crazy as they come back from the dead to send the game to OT.

Just WOW:
When the Penguins made it 3-1 with 13:31 left, I don’t think anyone of the 69,620 would say the Flyers were able to make a comeback and sure enough, they should that Philly fight in them and to quote Eagles center Jason Kelce “Hungry dogs run faster” and that is what they did and forced the game into overtime.

Brian Elliott Performance:
Everyone wanted to see Carter Hart in goal for the game and fans were upset about him not playing due to injury and did not like that Brian Elliott got the start but overall he did ok, let in a bad goal by Malkin which gave the Penguins a 3-1 lead in 3rd, Eliott would make 40 saves on 43 shots.

We have some Philadelphia sports royalty in the house tonight! pic.twitter.com/4EOlNJbpaq

Eagles Coach Drops the Puck:
Eagles Head Coach Doug Pederson would receive a thunder ovation and then he would drop the puck before the game with Claude Giroux and Sidney Crosby

We need a tiebreaker:
What do I mean a tiebreaker, both the Flyers & Penguins have a win against each other in the Stadium Series, the Penguins won the 2017 battle at Heinz Field and the Flyers took 2019 at Lincoln Financial Field, how about we go to Penn State????

Penguins in 2017 at Heinz Field

Flyers in 2019 at Lincoln Financial Field 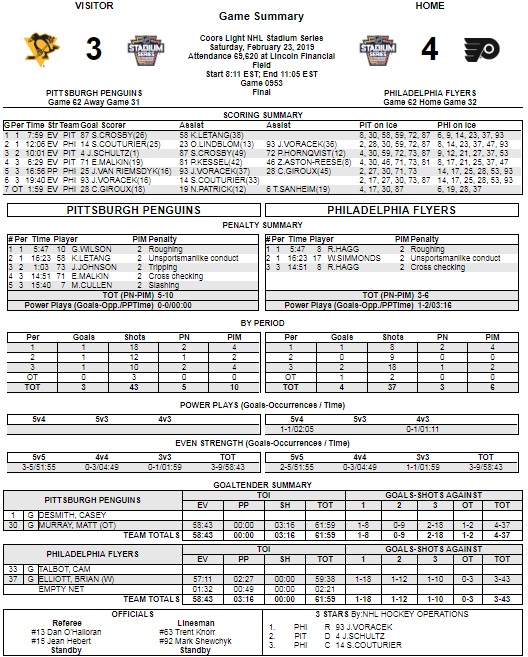 Overall this is one that you will always remember and this one was special as there was a lot on the line as both teams are fighting their way into the playoffs.