Philadelphia: After taking down the Rockets on Monday, the Philadelphia 76ers looked to keep their winning ways as they took on the San Antonio Spurs from the Wells Fargo Center in South Philadelphia on Wednesday night.

Late in the 4th quarter with the Sixers leading 121-120, the Spurs had a chance to win the game at the buzzer as DeMar DeRozan would drive to the basket & he would get Blocked by Wilson Chandler. The Sixers would hold on for 122-120 win.

Here is how the Wilson Chandler Block looked and sounded.

DeRozan gets blocked and the Sixers get the W. pic.twitter.com/ToL7YIqImC

Tom McGinnis on 97.5 The Fanatic:
“Sixers 121 Spurs 120 DeRozan off a high screen by Aldridge drives it down the lane puts it up and it’s Blocked its loose and Simmons has the ball, Simmons with it to Corey Brewer Brewer trying to keep it away from Spurs he is doing a good job, goes to Redick  the Sixers win OOOH MAN DeMar DeRozan hold on there is a whistle at the end there is 1.1 to go I believe it was Belinelli fouling Redick but DeMar DeRozan drove it and Wilson Chandler with his biggest play, OOH MAN” 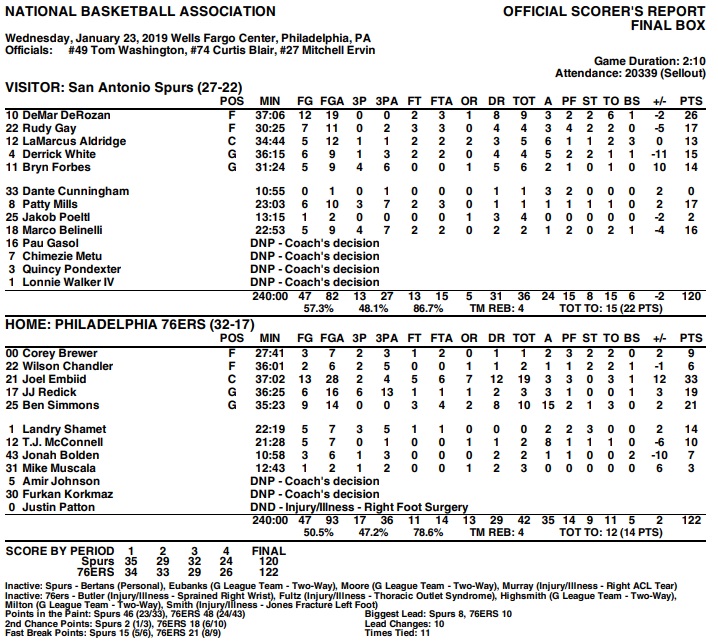 The Sixers now head on the Road for battle with the Denver Nuggets on Saturday night at 9PM on NBC Sports Philadelphia.