Philadelphia: We are only 20 days from Temple Owls playing in their bowl game against Duke in the Independence Bowl vs Duke on December 27 and things just got interesting as it comes to Head Coach Geoff Collins.

Over the last couple week, there were reports that Geoff Collins was up for the coaching job at Georgia Tech

Source: Temple's Geoff Collins has emerged as the leading candidate at Georgia Tech. No offer has been made yet. But he was in Atlanta on Thursday, met with Tech officials and they've indicated he's the favorite. A deal could happen as soon as tonight.

On Friday, reports saying it is a Done Deal as Collins take Job at Georgia Tech

Geoff Collins is going to be named the Georgia Tech coach today, a source tells me. @TheAthleticATL 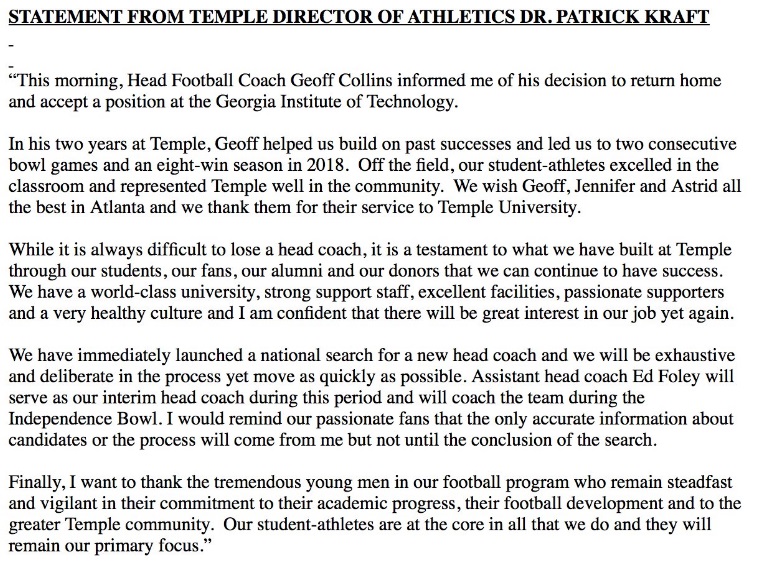 Ed Foley is expected to be Temple's interim coach for the bowl game according to a source.

Foley was the interim coach when Temple played Wake Forrest in the 2016 Military Bowl.

This is a repeat of what happened 2 years ago when Matt Rhule was coaching at Temple and he would leave to take the job at Baylor right before Temple played in their bowl game.

During his two years at Temple, Collins went 15–10 and picked up a bowl win in his first season in 2017 when Temple defeated FIU in the Gasparilla Bowl at Tropicana Field in St. Petersburg, Florida.

Something interesting, Temple plays Georgia Tech during the 2019 season, that game would be September 28 at Lincoln Financial Field.